Trekking across the Buran Pass, Himachal

She knew. I could tell she knew that I was in pain. I had been making sure that the violent negotiations between my calves and knees were kept to, well, myself. But she could see through it.

I was determined to take myself and the 20 kilo pack on my back, safely to wherever the trail ended. This was the last, and particularly gruelling, day of a 6-day-trek across the Buran Pass. And I was not going to let my knees or calves come in the way of my finishing the trek. I was not going let myself get distracted by a little bit of pain.

I was not expecting to meet a tall gentle woman with a kindly old face with expressive eyes. I stopped. We talked. I told her how we had started a little ahead of Rohru and had got accustomed to walking in cold rain. How we had crossed a snowy, windy Buran Pass, wet to our bones, while the falling popcorn snow made us all look much older than we actually were. She seemed proud of our achievement, and did say something to that effect. She told me all about her family, about her three children. How proud she was of them. One of them was in the Army, and the other two… well, I don’t really recall. I was in pain, remember. And all I wanted was to get along and finish the day with a hot bath and a comfortable bed… but I stayed and we talked some more. After a few minutes she said, ‘Wait, let me give you something before you go’.

I waited. Hoping it would be some magic potion a la Asterix. A little bit of that today would help. Till the previous day, well, actually till the very afternoon, I was feeling as if I was well up to the task and actually enjoying every bit of it. But as the day wore on the downhill started to become endless. It felt that we were heading for sea level! Incidentally it eventually turned out to be an over 2,100 m descent – much more than I thought my poor knees were capable of doing in one day. Turns out, as I found later, that it was my calves that made the sacrifice – two days on, I still cannot walk down a single flight of stairs without holding on to the banister and grinding my teeth.

While I waited for her bring the magic potion, I saw her scamper up a tree. Oh, that is where they keep the elixir, I thought! Well, actually, she was fetching fruit for me. Not a couple, but a whole bucket load. I protested, but she kept bringing out more from the blanket wrapped around her bosom. I kept protesting but took most of it anyway.

I kid you not, the fruit did work as an elixir. I kept eating, one at a time, all the way down. And kept the seeds in my pocket, as I was instructed – you break open the hard covering of the seed and eat the insides too, so ‘don’t throw away the seed’, she had said. A little energized, I suddenly realized what a wonderful, loving experience I had just been part of. And I had not even asked her name. I was not even sure I’d ever find her. And then I recalled that I did have a picture of her – I had shot a portrait as she bent down from the high perch to hand over the fruit. Relieved, I knew that one day I’ll go back to the village in search of her, with a print of her picture in my hand. And with a big box of mangoes, some chocolates, maybe. Next summer, perhaps, with my family…

After spending a night in Sangla, I left for Delhi the next day by local bus and reached Rampur Bushehr, just in time to find a Haryana Roadways bus going to Delhi. And found a good seat too. A quick interchange at the ISBT to the Delhi Metro brought me to Gurgaon. As I was walking from the Metro station to home, I suddenly realized that the camera was not in my pocket. It was gone. Where? Did I lose it in the overnight bus journey? Did it get filched in the crowded morning metro ride? I was not sure, but it was gone, for sure. And along with it, all the pictures of the trek, and the picture of the beautiful, kindly old lady. 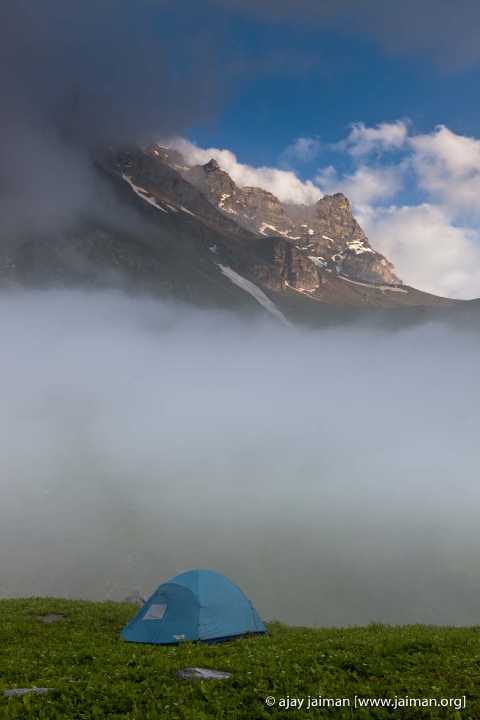 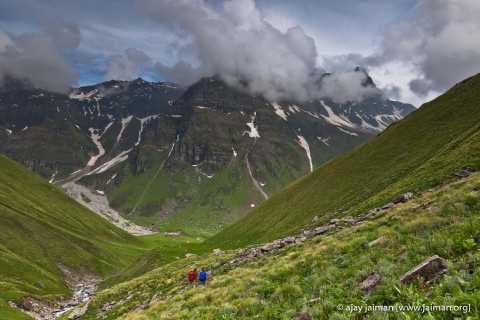 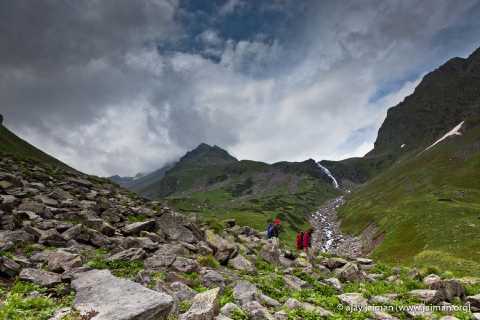 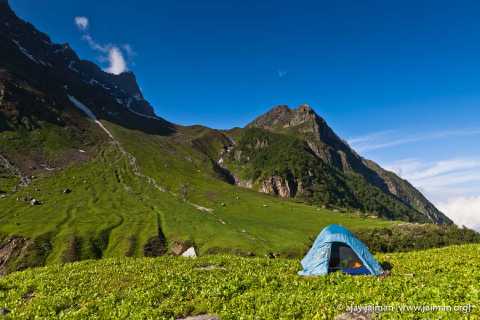 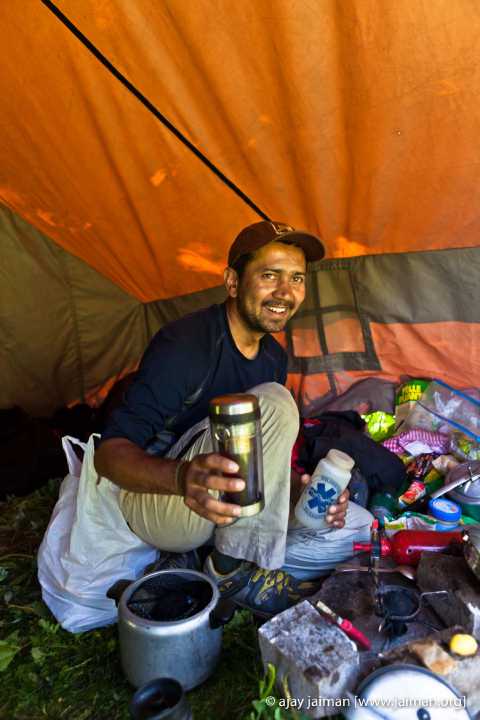 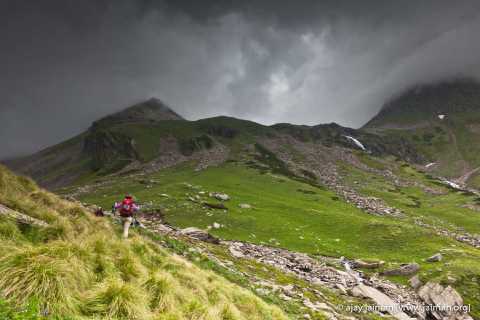 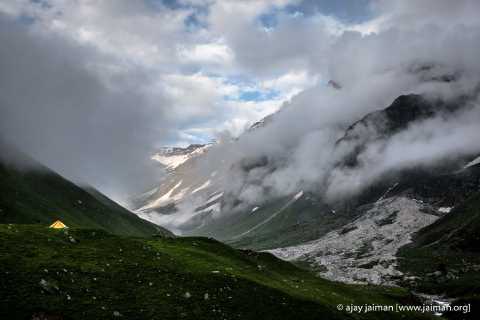 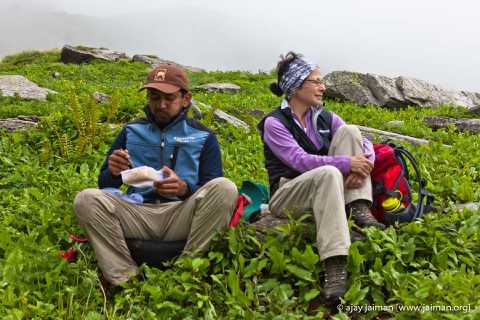 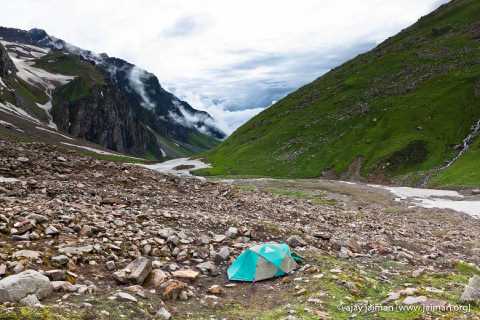 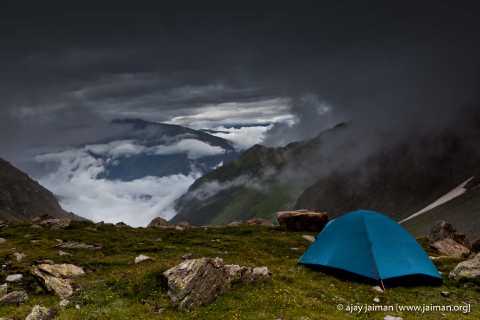 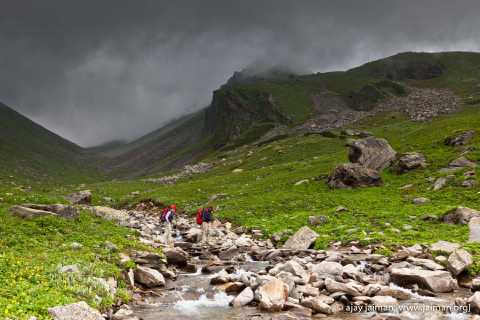 You may also be interested in these related posts:
Hiking in the Spiti valley
Trek to Chandratal -- the moon lake
Trekking to Beas Kund
Bhaji on the bypass
Manali to Leh — Self-supported cycling trip