After the excesses of the new-year partying, you’d expect that on a cold and windy Sunday morning people might want to stay tucked in a little bit longer. Perhaps spend a lazy Sunday morning at home. The last thing you’d expect is a large turn out for a ‘critical mass’ cycling event, on a biting early January morning.

‘Critical Mass’ is a cycling event organised in many cities across the world to draw attention to the fact that cycling is a good way to travel and that cyclist have an equal right to the road. In most cities, the event is organised to coincide with the peak office traffic on a Friday evening – typically the last Friday of the month. We in Gurgaon have had a couple of successful Friday events but have not managed to sustain the momentum. The conjecture is that most working people can not get away from work in time to participate in the event.

Perhaps that is why a Sunday morning works better. Or so it may appear, going buy the turn out today. I don’t have an exact head-count but there were at least 50 riders, if not more. Clearly the largest ‘critical mass’ of this city.

And there was befitting police ‘bandobst’ in the honour. I got a heads up on it when I got a call as I was leaving home, from a friend who I had not talked to in months. ‘Are you guys riding today?’ was the innocuous question. Why, I asked. ‘Oh, there is traffic police all over and on enquiring they said there is a cycle rally. I thought it must be you guys.’ Oh, boy, was she right. We had escort jeeps and motorcycles, with wailing sirens, and we had cops manning all traffic intersections. Nobody in the vicinity would have missed noticing that sometimes cyclist have a right of way. At some crossings we even had a fairly large cheering crowd. A real ‘critical mass’ in every sense of the word. I did thank all the cops I met on the way, but obviously this was made possible by the senior leadership of the Gurgaon police, who were present at the flag off and at the closing. 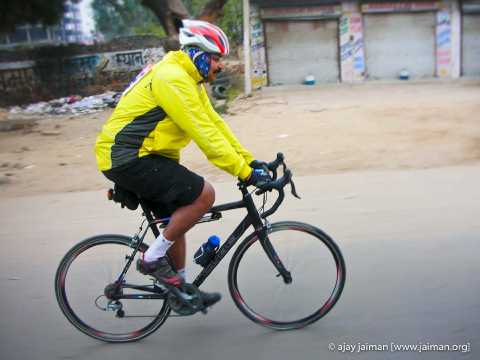 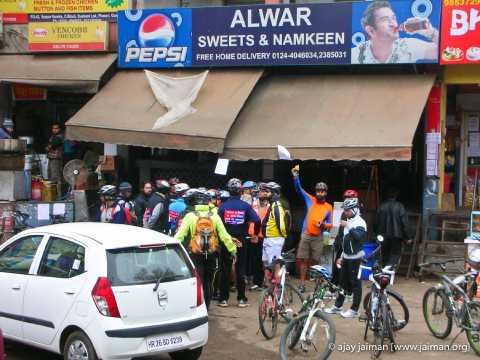 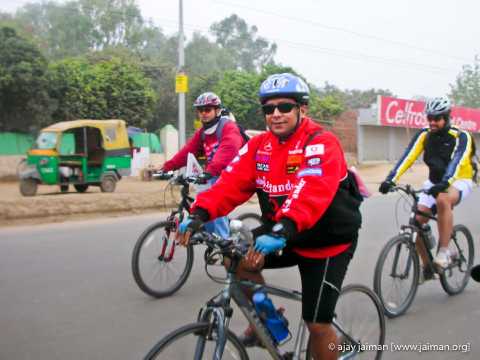 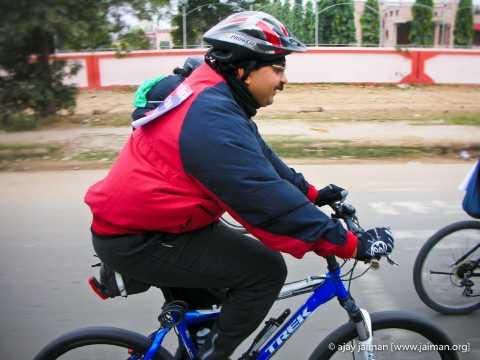 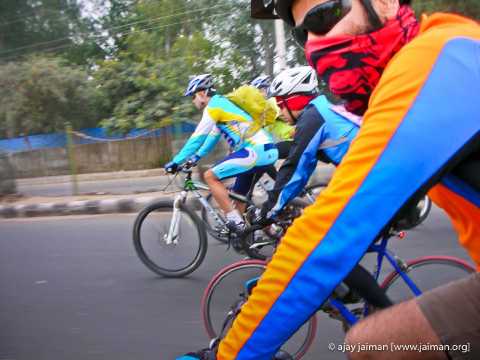 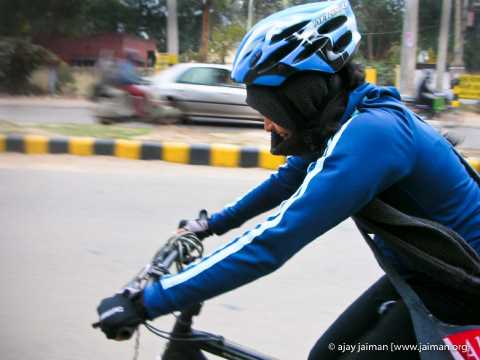 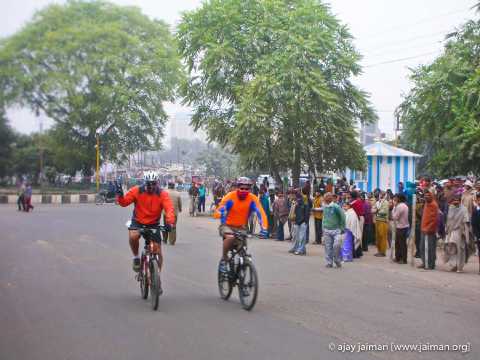 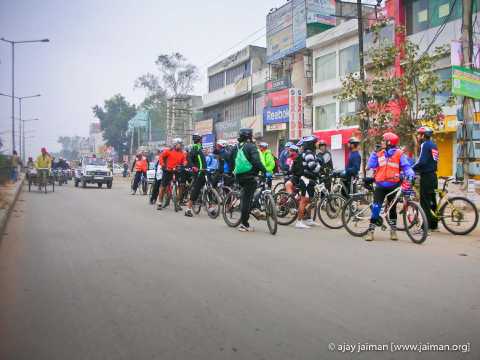 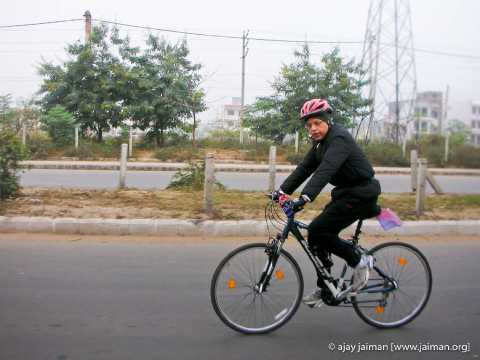 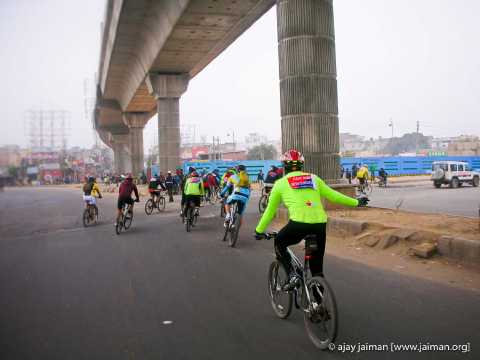 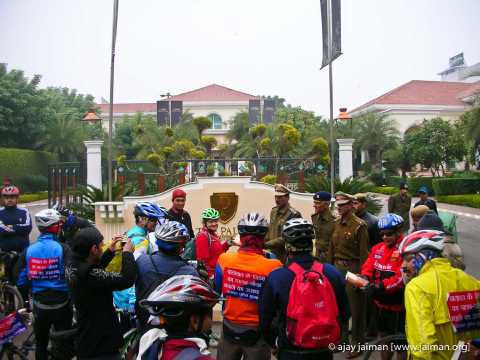 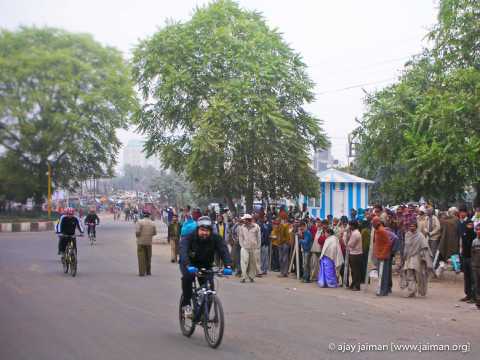 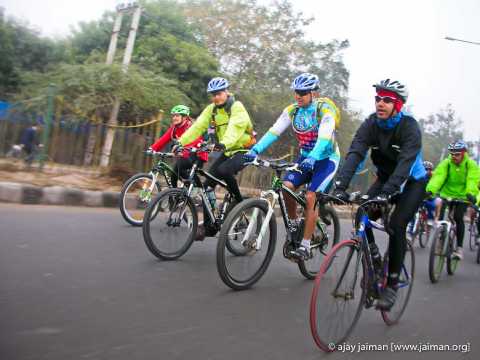 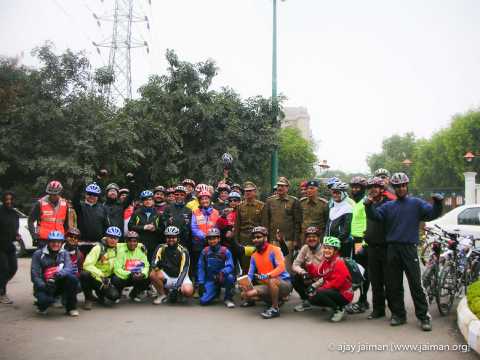 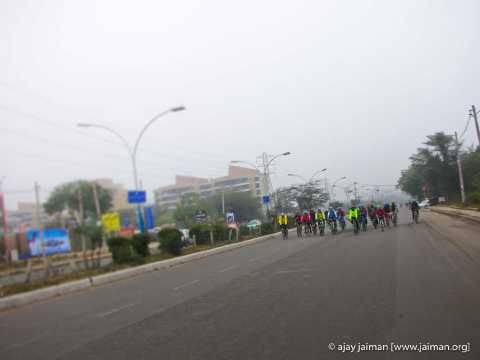 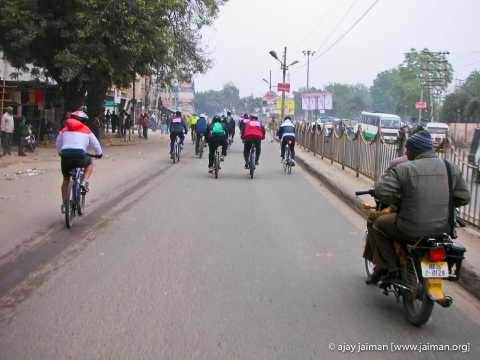 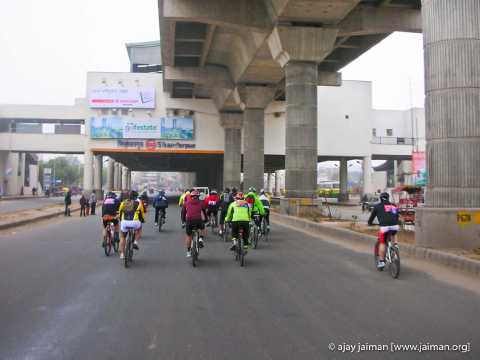 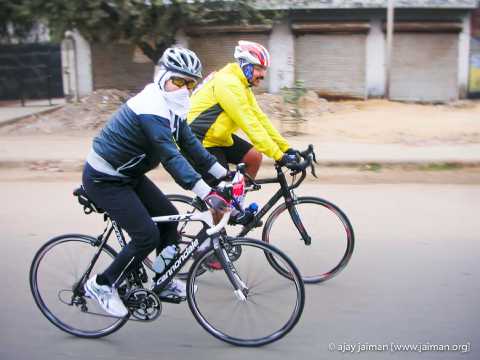 Though I must add that the cops were a little too earnest. They would not allow any cyclist other than the group to come anywhere near us. I tried to talk to some of the friendly escorts to allow other forms of non-motorized transport to ply normally. The enthusiastic motorcycle cop told me that they were making sure we get the right of way – so nothing should come in our way. I guess we need to figure out a way to show that the critical mass is not an elitist thing – it is an event in the name of all cyclists not just for the ones in lycra.

Gurgaon has got its critical mass back. I am sure it will only get better. And it is an open event. All you need is a cycle. We strongly recommend a helmet, but it is not a legal necessity. Mark your calendar for the morning of the first Sunday of the month.

You may also be interested in these related posts:
Who cares about bicycles or about climate change?