Should I be cycling to work everyday?

Before I get to the ‘should’ let me answer if I ‘want’ to cycle to work. The unequivocal answer is yes.

For me the reasons for cycling to work are many:

I also happen to be in a particularly fortunate situation:

It is a near perfect situation for me to cycle to work everyday. So, do I? Did I participate in the ‘Commute to work’ week that just ended in Gurgaon? The answer is no.

Honestly, I would love to. But I don’t. Why? Because, I have tried it. Hundreds of times. For close to a decade now. And it always ends badly. This is almost the exact run of events that I encounter every time: I give everybody at home and office a heads-up that I’d be riding to work. Once I start, almost without exception, within the first ten odd days I encounter a life or limb threatening situation. And I end up all ‘shook’ – yes, that is a word, ask any kid, or young-adult.

And then, over a cup of hot home-made coffee, I’d ask myself is riding to work worth risking my life for? How about a limb? Is that a reasonable price to pay? Your mileage may vary, but I always arrive at the same conclusion. No. Well, at least not like this. If I were to die for the cause of cycling, and if that were change the world for all other cyclists, then perhaps, yes. But somehow the idea of spilling another five-and-a-half liters of blood to the altar of modern capitalism – the idea slowly dying on a toll-road constructed via public-private partnership – seems very unattractive to me.

Next day, I pack away my ‘commuting’ mindset. And then in a couple of weeks the bruises heal. And I get over the unpleasant encounter – fall, scare, near-miss or whatever it was. A couple of months later, I am back at it again. The commuter bike is washed, lubed and ready for some more action.

That was the pattern till last year. When one evening on my way back from office, on a busy crossing, a car cut right in front of me leading me to fall flat on the road. The oncoming traffic did not run me over. Otherwise, you wouldn’t be reading this – whoever heard of ghosts writing blogs with bandaged hands. It was then that I decided that I’d rather hang around on this planet, at least a little bit longer, with all my limbs intact.

That might seem defeatist and self-interested. What about ‘being the change that I want to see’? What about the ‘good karma’?

Trust me, I have thought about that. If you are a conscientious commuter you might think of what follows as a feeble justification. But please do consider it before dismissing it entirely.

The fundamental question to ask is: how do major socio-cultural changes take place? Getting an average well-to-do Indian to give up their car or motorcycle for the humble bicycle is a huge change. Getting the self-serving political leadership to commit themselves to a long-term egalitarian transport road-map that privileges the humble pedestrian, cyclist or public transport over the private car, is even more huge.

It is my considered opinion that a bunch of rich people commuting to work, while commendable, is likely to change very little. Perhaps ten-thousand cyclists together making their presence felt in rush hour and demanding their right of way, may be. Many years ago some of us diligently participated in ‘Critical Mass’ rides in Gurgaon. [In case you are not familiar with the idea of critical mass, you should look it up. It is a global phenomenon] That effort had some potential, but unfortunately for a number of reasons it fizzled out.

I am inclined to think that unless it is a revolution, the change will not start at the bottom. If it could, it would have already. Since a very large number of people already cycle or walk to work. And many die in the process. Every day. Yes, really, every day. Sure, most of the cyclists and pedestrians are from a different socio-economic background, but do reckless drivers discriminate by socio-economic backgrounds? Do the policy makers care about the fact that the cyclist who was crushed to death was wearing spandex and riding a carbon frame? In my opinion, the addition of a few ‘rich’ people to the already huge pool of ‘poor’ cyclists makes no statistical difference.

It is my submission that if we want to change society we may need to take a more radical approach. Most significantly, it needs to start with the goal of making commuting safe and comfortable for the millions already forced to cycle or walk to work.

My cycling to work as a symbol of what is possible is just that. A symbol. And yes, symbols are important. I agree. But personally, I have ‘been there and done that’. And while I respect and even applaud any action, I personally have lost patience with symbolic public actions and protests.

The next logical question is ‘why am I done with symbolism?’ I did consider attempting to formulate my views on that right now. But decided instead to keep it for a later time. Let me know in the comments if that interests you. 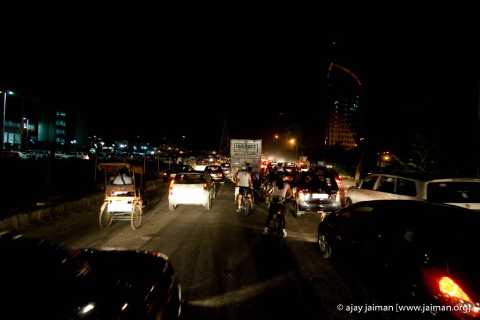 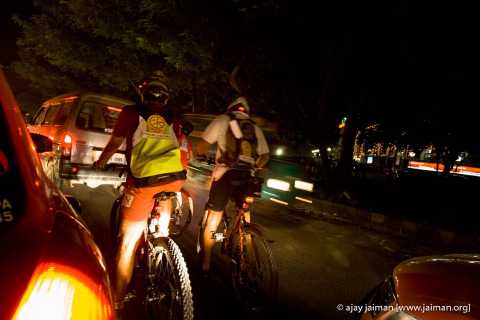 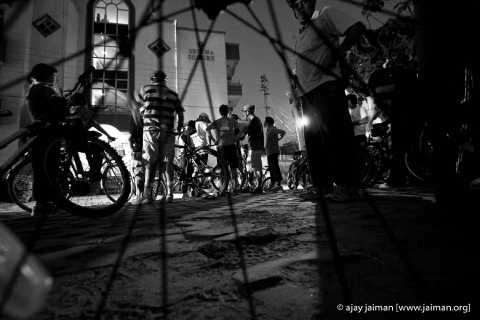 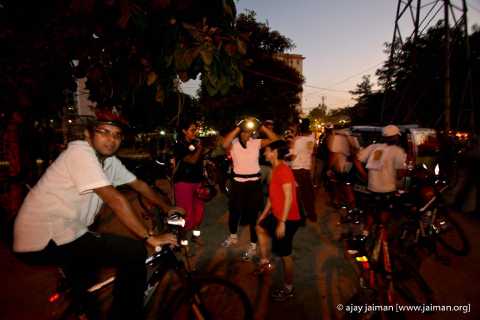 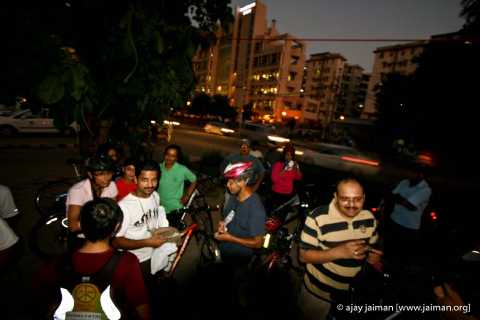 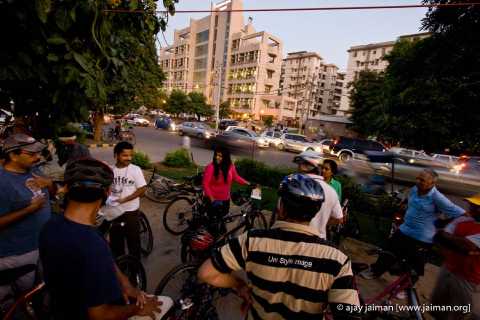 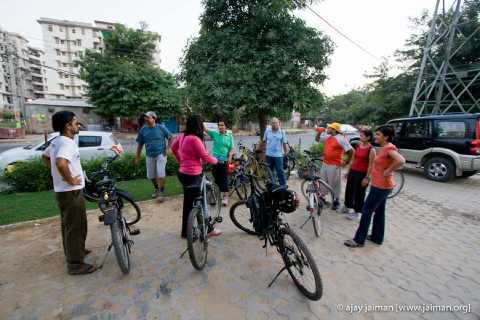 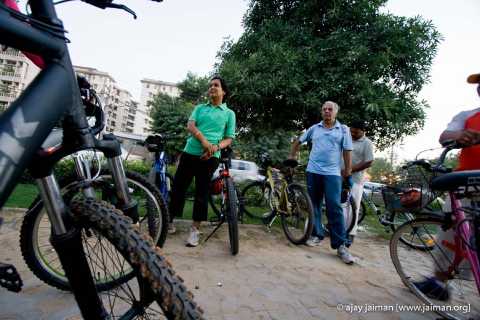 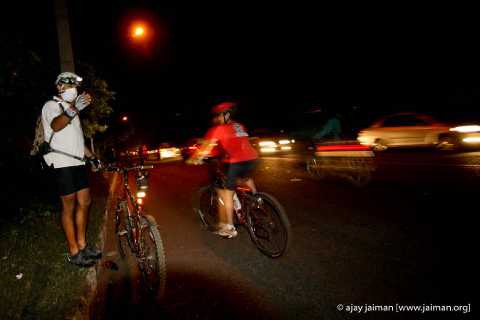 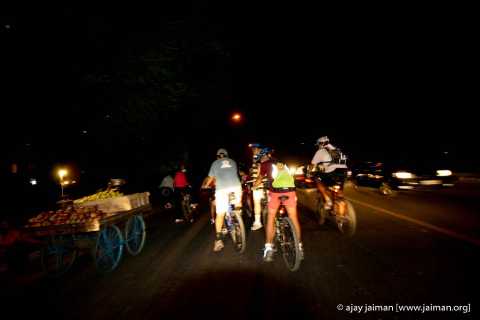 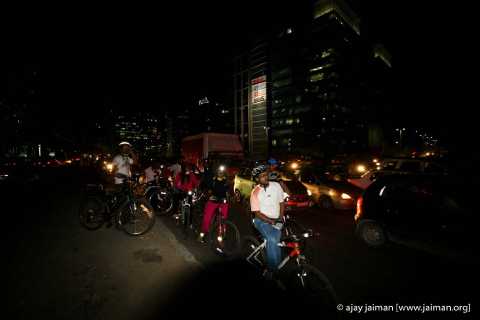 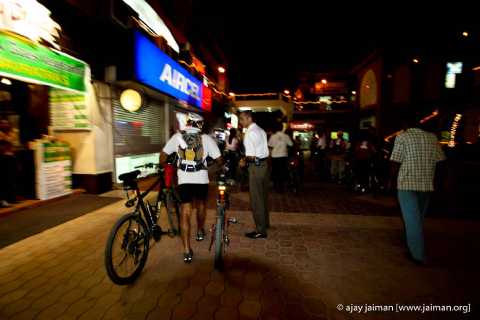 You may also be interested in these related posts:
Gurgaon critical mass cycling — a new beginning
Who cares about bicycles or about climate change?