A blazing sunrise in Darjeeling

It is five in the morning and still pitch dark outside. But I am up and ready to face the winter morning chill, which admittedly, is not at its peak yet. My camera bag on my shoulder and my trusty hat on my head I am ready to leave the comfort of my hotel room. While this is a nice hotel, it is old style. No digital key swipes, just one key for an old-fashioned lock. Therefore I need to wake my wife to let me out of the hotel room and lock the door behind me.

The narrow wood-panelled corridor outside is quiet. I walk lightly on the carpeted floor so as not to wake up other guests. On reaching the third floor lobby — the two lower floors constitute another hotel, and the ground floor is occupied by shops and restaurants — I find the exit gate shuttered. There is no guard around. I look for some help in the lobby, but there is nobody there either. I try to raise the shutter myself, which seems unlocked. But I can’t. It does not look like a particularly heavy shutter, but despite my rather large frame I can’t lift it. Surely, there must be a trick to it that I have missed. But there isn’t enough light for me to examine it carefully. I fish out my torch from inside my camera bag. Still no luck. Once again I go back into the lobby and look more carefully. In the dimly lit space between the lobby and the corridor, I notice what seems like a person huddled on the ground. Asleep. Probably the guard. I wake him up. He takes a few minutes to gather himself and then he lets me out by unlatching the door — it was a simple but counterintuitive manoeuvre, something that hadn’t even crossed my mind.

While all of this is happening, at the back of my mind I am wondering what would happen if there were an emergency. Like an earthquake or a fire. The 50-odd guests in the hotel would surely get stuck behind this shutter, and would then have to wait for a guard to let them out. The guard himself would have a hard time getting to the gate since the approach would be crowded by a rush of people trying to exit. As far as I can tell, this was the only exit. Come to think of it, there are no fluorescent markings or signs for exits. I had not noticed any signs for emergency exists — I suspect there aren’t any. When I returned to the hotel later that morning, I checked carefully and noticed that the back of the room door didn’t even have the mandatory floor plan with marked exits. I wondered if it was a legal requirement?

Anyhow, I realized that, in an emergency, once the guests from this hotel did manage to exit the shuttered door they’d bump into another 50-odd people exiting from the other hotel, one floor below, that shares the long and narrow staircase to the ground floor. So if one were to get caught up in an unfortunate event here, one was as likely to be trampled as buried under falling debris.

Not a pleasant thought, first thing in the morning. That too on such a beautiful morning. On a relaxed holiday in a historic old town. I shake myself out of the pessimistic mood and get ready for the famous Darjeeling sunrise. That was the reason, I was up before dawn, for the third consecutive morning. I had now identified a good location to plant my tripod and make an extended time-lapse of the iconic sunrise across the face of the famous Kanchenjunga massif. Excited, I head downstairs.

As I climb down the narrow staircase I get a sense that something is up — the narrow street below is not quiet and deserted, as it should be at this time in the morning. The reason is immediately apparent to me just as I emerge into the street — a spectacularly bright orange-yellow blaze is clearly visible across the dark sky and even darker narrow street.

Two fire trucks have cordoned off the road. About half a dozen firemen are battling the blaze. A building across the street, about 50 meters to my right, is on fire.

I notice that there is a narrow street at the higher level that is at a safe distance and yet providing a clear view. I decide to drop the sunrise project and instead document this action.

Since these are mostly shops I surmise that there are probably no people inside at all. Or, if there were any inside, they had either escaped or had already been rescued. Still I could tell that this will lead to significant financial losses and loss of livelihood for many. Some folks, perhaps, owners of the shops, were scrambling to get into the adjacent building — which was just beginning to catch fire — to salvage things from inside. I notice about half a dozen of people manage to pull out a large chest from inside of what I can see is a photography store. The fire is still growing and very soon this building is too dangerous for people to go inside. The photo store people seem to have given up salvage operations. I notice some of them leaving with about half a jeep worth of stuff that they have rescued from the fire.

The two buildings that are now fully ablaze once housed perhaps six shops. These were very old and mostly made of wood. They very likely did not follow any modern fire code. Given that our somewhat fancy hotel did not have any fire alarms or a sprinkler system, I suspect that these shops did not have any either.

The burning buildings are flanked by two relatively modern concrete structures — less flammable then the old wooden structures now on fire. These two concrete structures are now being used to augment the firefighting efforts on the ground. For the six or so yellow-hatted firefighters, in black jackets (why black, I wonder) there are about two dozen good Samaritans doing what they can from the roof of the adjacent buildings. Some are throwing water using whatever receptacle they can lay their hands on. Still others are trying to use long poles to try and rip the roof off the building to create access for the firemen’s water canons.

One person in a sleeveless shirt and rubber slippers, precariously perched on the roof, particularly stands out. He has this long pole with some kind of a hook at the end that he is using to pull out the tin roof of the building. As he reaches over and down from the top of the building, he is holding on to a metal pole for balance. Given how he is sparsely dressed in the cold, and with all the water around, I wonder what will happen if his slippered feet or his cold, wet hands were to slip… What if this gentleman or a firefighter were to get injured? I look around and notice that there is no sign of an ambulance or even basic first aid, even after many hours of active firefighting.

The firemen themselves seem to be undaunted and are bravely soldiering on with their limited resources. I can count two fire trucks and a jeep; and perhaps half a dozen people in yellow hats. One ladder and one pickaxe. Many of the water pipes are spraying water from small leaks that have probably developed over years of service. I am not sure what they’d do if they ran out of water? I doubt if they can call in reinforcements. I suspect that the entire fire fighting machinery of Darjeeling town is already in service. If these two fire trucks were to go away for a refill, the fire-fighting would very likely come to a standstill till they came back. How quickly will the trucks refill? Would the fire -station have some kind of a high-capacity truck refilling system? Would the traffic on the narrow roads part to let the wailing trucks speed ahead? Questions and more questions…

Three hours later, as I get into a taxi to go to the airport, I notice that the fire has been contained — by the brave people with some fortuitous assistance from the two adjacent concrete buildings. But the fire is still smouldering. And the smoke is still rising to high heaven, as if to send a wake-up signal to the ‘smart’ people in Kolkata and New Delhi. 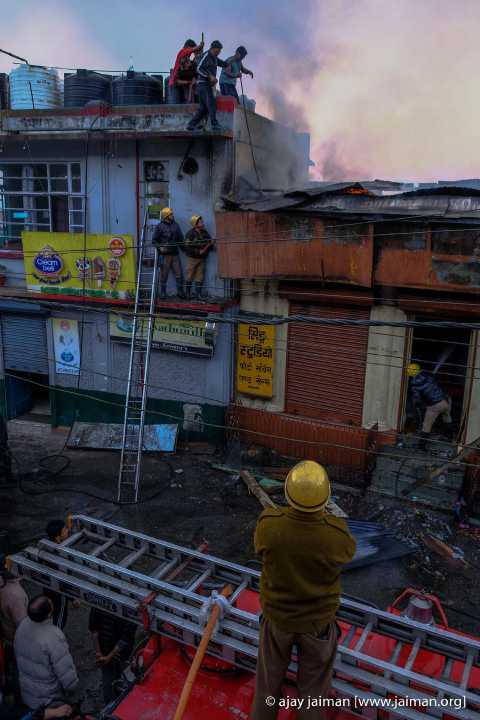 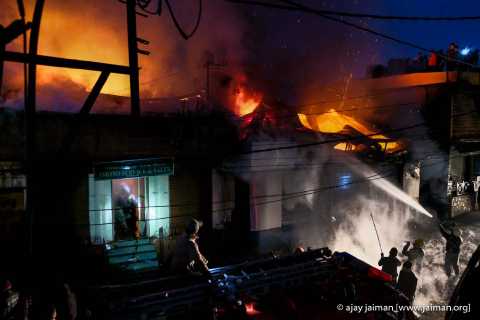 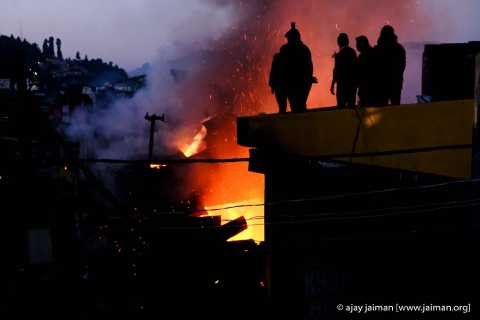 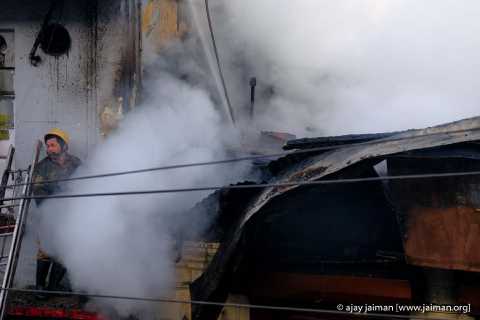 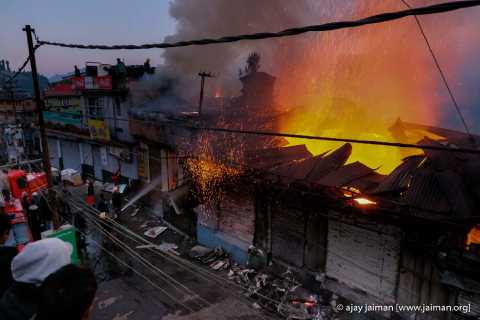 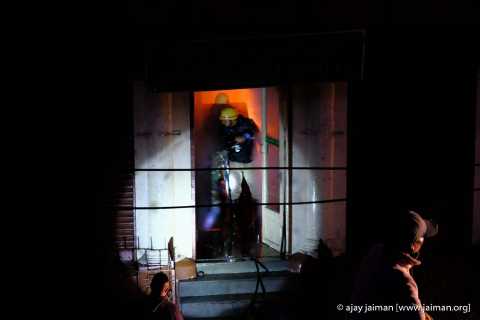 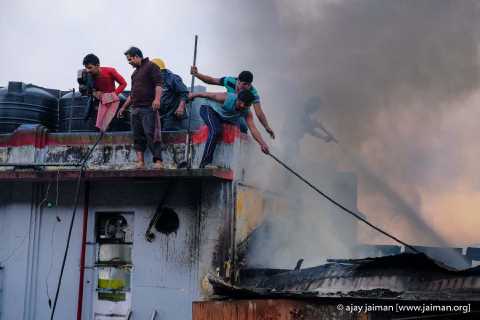 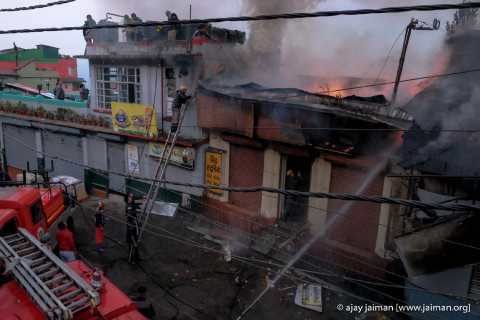 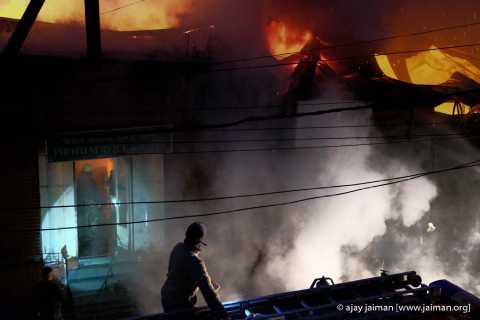 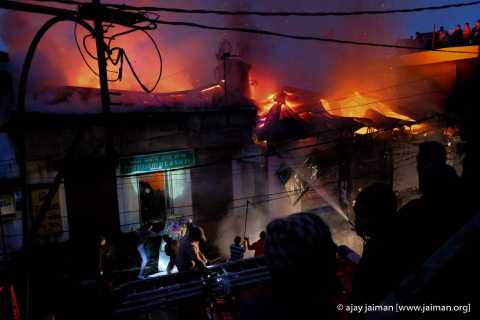