Bhaji on the bypass

We’re on our way to peace, quiet and stupendous views of the Himalayas in the distant hill station of Kausani in Uttaranchal. Barely an hour out of Delhi, and the cow belt hits you, literally. Ambling senior citizens, regurgitating a late munch on some roadside grass provide ample experience in zig-zag driving. Cow on the right, swing to the left; tractor approaching on the wrong side, swing to the right; pothole ahoy, bump thump, oops too late, speeding Indica zooming up to kiss its maker, and a truck, swerve to avoid being spread like jam between them. Before the calm environs of Kausani can bring our BP down, the roads of UP and Uttaranchal are honour-bound to do everything to bring our BP up. 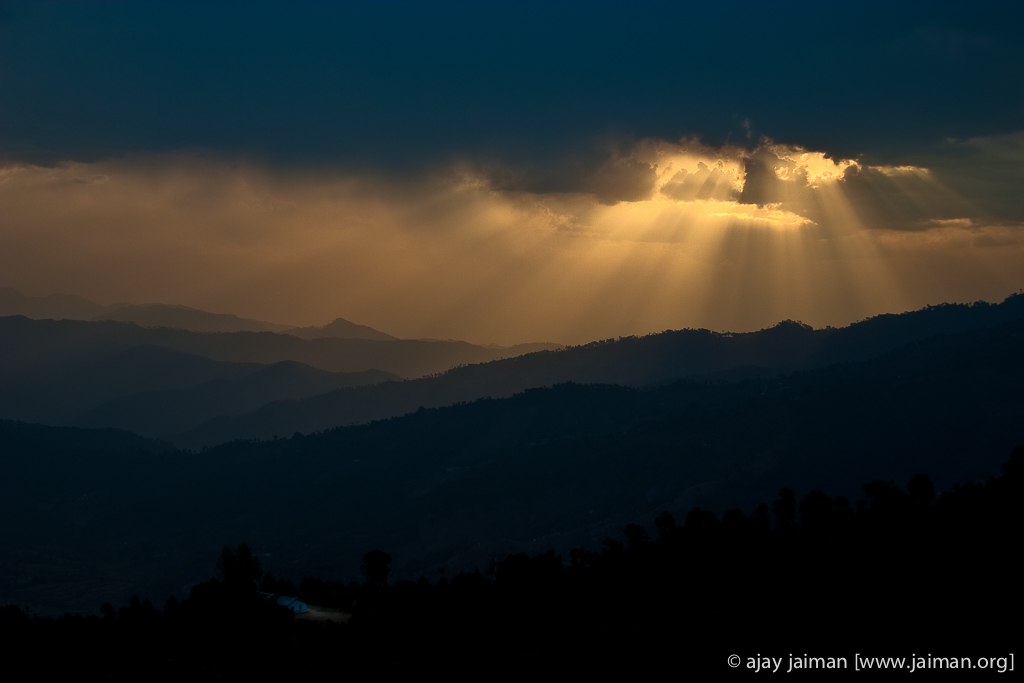 The sun playing hide and seek in the clouds

“What’s the rush?” Really, what is the rush? After years of making zippy cross country drives from the maddening plains to the heavenly hills, with crack-of-dawn departures, whistle-stop loo-breaks, on-the-go meals and feet-swelling inertia in a moving vehicle, we arrived at the belated, yet timely (if that makes any sense) realization that “the journey is it!”

Our new mantra: getting there is half the fun. So, we turned a 10-hour drive into a 15-hour drive, and were all the better for it. Departure still at dawn – after all getting caught in Delhi’s notorious office hour rush isn’t any sane person’s idea of an auspicious beginning to a holiday – but barely an hour out, and we stopped for tea, and a lingering look at the rising sun. Another hour later, we were zipping past the cropped wheat fields of Hapur, where in the distant horizon, steaming chimneys are our only evidence of the city’s industrial spine.

Bypasses. Whoever invented them should be given an honorary Nobel. Seriously. I remember a trip down this Delhi-Hapur-Moradabad-Rampur-Kathgodam-Ranikhet road five years ago when Hapur and Moradabad were Mofussil towns with seedy reputations, railway phataks and hour-long traffic jams that ensured a visitor never came that way twice. Today, the only sign of these towns is, well, a sign, “Welcome to Peetalnagri” says the one as you swing around the portals of the brassware city of Moradabad, famous as much for its Moradabadi lota and Moradabadi kettle as for its rampant thugs. The next thing you know, you’re on a bypass – you simply by-pass the smoke, the traffic, the thugs – on a dual-line bypass that finally allows you to floor the pedal.

Same story in Hapur. You’re on the bypass, and before you can say, “Paper cones” (Hapur’s big industry by the way), it’s bye bye Hapur.

After Moradabad, a steady line-up of promising mango orchards, wheat fields and sugarcane cultivation brings us to the equally messy Rampur, famous at one point for its razor sharp knives. “Rampur ki chhuri or Aligarh key taaley” – not a reassuring thought if you happen to cross the area after dusk. It’s mid-April and the hot summer breeze – the watermelon-ripening and mango-sweetening loo – has still not begun to blow in right earnest. The mango trees sway with small green kairees, probably waiting for some kid to sneak in and grab a few to eat with salt. But this is the land of the Dusheri and Langda, so in another three months, ripe yellow and green fruits will be ready and waiting to be hauled into cities like Delhi, where mango-worshippers like us can show why it’s the king of fruits.

But I digress. A turnoff from Moradabad takes us towards Rudrapur, and finally to the base of our ascent, the final railhead, Kathgodam. We cross patches of jungle – five years ago it was a dense tangle of trees, undergrowth, vines and thorns – that sent the fear of the tiger into our bones. Today, the better part of the stretch along the road is plantation forest – lines and lines of trees grown for wood that feeds the paper and ply industries of Rampur, Rudrapur and Hapur. Villagers gather firewood freely, ensuring that not a twig is left behind. On this, the Tanda road, it’s easy to see why it’s the end of the road for the tiger.

At Haldwani, we hit the main Haldwani-Kathgodam road and get our first glimpse of the hills. As we climb, the kids are hopping with excitement – finally after miles and miles of being on the road, an undulation in the land gives at least some inkling that they’re going to the mountains. Two of the kids and one adult traveling with us have never – yup, believe it or not, never – seen a mountain in their lives. The excitement is palpable. It’s almost as if we were seeing them for the first time too – through their wonder-struck eyes.

Further up, approaching Bhimtal, we stop at a plush hotel, misleadingly called Country Inn. Hardly an inn, with a swimming pool, plush rooms, swishy interiors, and a hefty tariff. Well, we had to stop – a clean bathroom was an urgent requirement. Hence, a short visit to the bathroom became a long and lazy tea break, complete with tea, pakoras, French fries and a stroll through the rose-resplendent gardens. 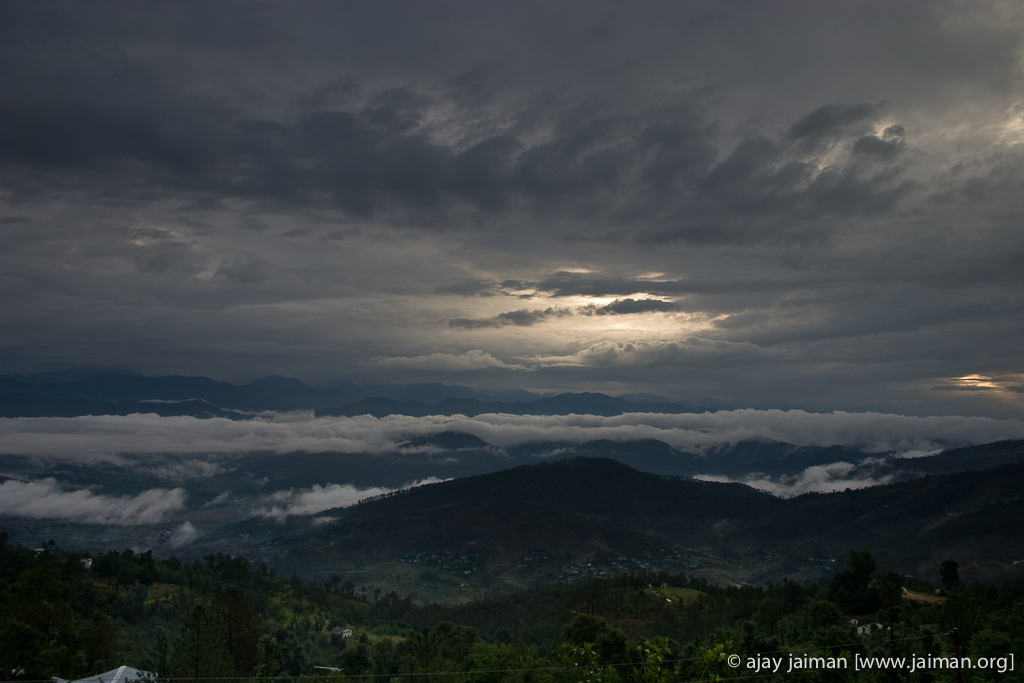 Refreshed, we move on. It’s evening and the light is failing. As we climb higher and higher, the sun starts its own technicolour show in the sky and on the slopes. As rust and reds blend with yellows and oranges, the slopes turn blue, then brown, then red, then black. Every turn, brings a new perspective, a new colour. In between, in the last rays of the sun, glows the burning red blossoms of the buransh, or the rhododendron, the state flower.

Higher and higher, our cars go round and round, going up a mountain, then down, then up another, in a ceaseless pattern that takes us deeper and deeper and closer and closer to the snow clad peaks of the mighty Nanda Devi and the Trishul.

Finally, at 10, tired and perhaps a trifle dizzy, we reach the quiet streets of Kausani. We head straight up, up right where the view is, to our hotel, the Chevron. The views are stupendous here, as well as at the higher up KMVN hotel which has nice and spacious rooms too.
The sky is inky black, and darker shapes are the only sign that somewhere out there the Himalayas are waiting for us. But, we of so much faith, continue to look out and sigh, aah, we’re here. Finally.