It’s freezing cold when we leave Losar. The guest house chowkidar tells us the temperature at night is normally sub-zero. So, on that cheerful note, we leave behind Losar’s square white houses, their roofs trimmed with firewood, their windows framed in black paint or tar, and a satellite dish and a solar panel practically on every roof. Cut off from the rest of the world for six months of the year, when the passes freeze up, this dish is what links them to the outside world.

Just outside Losar, we encounter some cheerful village women, whom Ajay promptly enrolls in his model-for-me campaign. After extracting a promise that he’ll send them the photos (and getting me to write their address down in my notebook), they smile and laugh, and chat up the kids. This area has patches of green, basically grass growing in the flat valley bed, feeding off the occasional rain, and the waters of the stream flowing nearby. There’s grass, so there are goats. And with the goats come the people. That seems to be pretty much the logic out here.

We head on, but it’s hard to floor the pedal if the scenery outside is so jaw-dropping. So we drive, say five kilometers an hour because it’s too hard to pass up all those colours and shapes and sizes. It’s an astonishing landscape of rocky pinnacles staring down at us. The bare mountains recede downwards to slopes of rubble and dust, victims of the extreme night cold and day heat in this cold desert. (Back home mom said something about these being sedimentary rocks, which I guess has something to do with the ease with which these mountains are crumbling).

11.30a.m. We stop to gape at Hansa, which lords it as 3835metres. Boulders as big as cars hang from the side of the wind-shaped pinnacles ready to let go at the first rain or rumble. During our trek to Beas Kund, we used to kid that if Mimi screamed she’d trigger a landslide. I’m wondering how these precariously perched boulders would respond to her vocal chords.

Half an hour later, we stop by the side of a bridge. Damini’s been going on about throwing stones in the water, and Ajay figures this is as good a place as it gets. We get down, and our feet land in talcum-powder dust. Caked. We move on, clamber over a line of rocks and climb down to the river’s edge. I dig around for stones inside the water. Damini is busy chucking them as far as she can. Siddharth is practicing skipping stones on water. Ajay walks across to the bridge and does what he does, take pictures.

Further on, we suddenly come upon giant anthills sitting on the side of the mountain. Naah, no ants. Just the wind having a field day with the soft stone and chiseling away and
creating this faux archaeological digs. More photos and we move on.

We’re getting used to it being rocky and sandy and dry, when the road suddenly opens out into a huge flat green plain surrounded by towering peaks. Ajay abandons the road, and takes the Innova onto the flat green, in search of the perfect photo. We spot a local. It turns out that he’s here collecting goat and sheep dung. Hello? What’s with that? It turns out that since there’s grass here, herders bring their sheep here. He figured it was a good place to stash up on some good quality fuel cum fertilizer. Smart cookie.
It’s nearly touching 2pm by the time we drive into Kaza, and we’re tired, hungry and kind of looking for a loo. There’s a Banjara Retreat here, so Ajay heads for that. It’s on the main road cutting through Kaza (actually only one road cuts through Kaza, so that would definitely be a misnomer of sorts).

We park, all hopeful and excited about staying at Banjara since we’ve heard so much about it. But one look at the dark and dim corridors (deserted), and really smelly, musty rooms and zero view and the decision is made. Let’s opt for the equally smelly HPTDC place. Fortunately, I dig into the Outlook Traveller (for trekking) and they mention a place called Sakya’s Abode. We roll along, and there it is, just a little further up from Banjara. I think we all fell in love with the place the moment we trooped down the stairs and stepped into the quadrangle that overlooks a slightly ramshackle but charming garden, complete with garden swings and chairs. And, boy, what a view. I could sit here forever. We check out the rooms, which are neat, clean, airy, and the bathrooms look like they were minted yesterday. Added bonus, the rooms here cost a fraction of the cost of Banjara, (we paid Rs.550/- but there are cheaper rooms for Rs. 350 too). The waiters are friendly and helpful, and the dining room has such an authentic Tibetan Buddhist feel to it, that you feel yourself soaking in it. 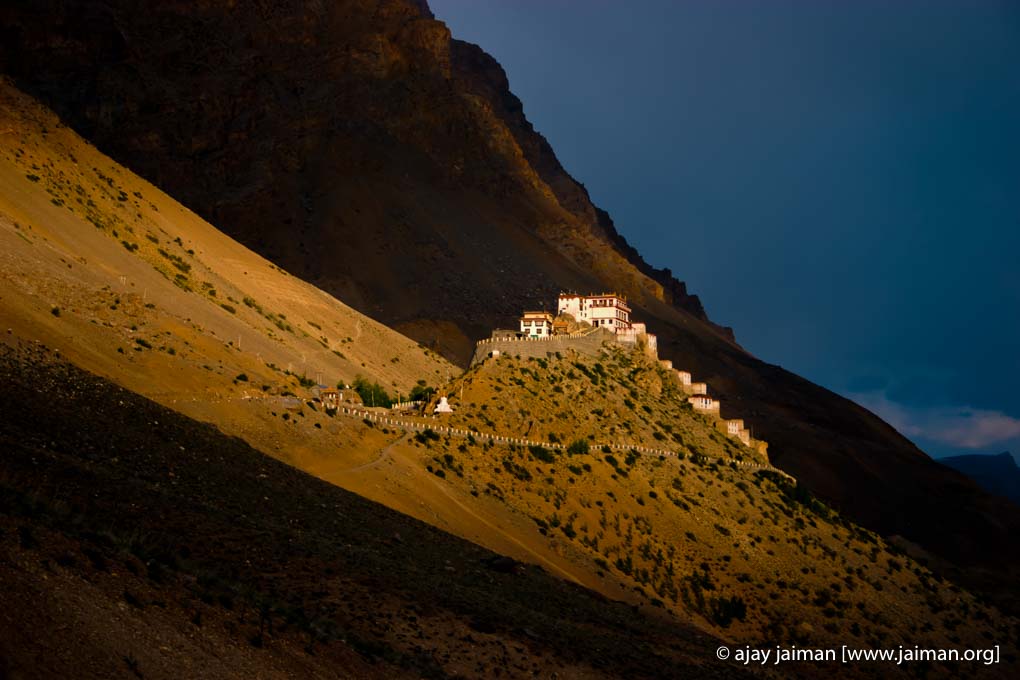 Freshening up, we head off to see the famous Ki Gompa, a 600-odd year old monastery that sits like a white and yellow jewel on top of a mountain. It’s a straight drive up. We land at the Gompa near evening, but it seems to be okay to visit even now. So, we walk up the steps, look into the prayer rooms, and a friendly monk escorts up to the roof where you have a fantastic 360-degree view of the mountains all around. I glance casually at the satellite dish and solar panels on top and wonder where that fits into a monk’s daily routine of prayer and practice. I guess, even at these spiritual heights you need to be clued into news.

Next morning, after a hearty breakfast, we decide that we need to drop altitude. Damini still has low-grade fever kept in control with a nightly dose of Crocin but she’s not eating much and is looking quite peaked. So, no more stops in Spiti (we’d planned a halt in Tabo for the night), and we decide to make a beeline for Kalpa in Kinnaur. We’ve stayed there earlier, it’s comfortable and the cook dishes out the best food ever. Plus Siddharth is keen to catch up with Rocky and Mojo, the resident dogs, so it seems like a good idea.

Fifteen minutes out of Kaza, the left bank of the road rises sharply in the form of giant anthills, rising at least 30 feet. Ajay clambers out for a photo, so does Siddharth. I take one of both of them against the pointed columns of dust and rubble to get some perspective. Fifteen minutes later we arrive at the turn-off for Pin Valley, which is 18 kilometres from here. That’ll have to wait for some other day, I guess. We drive on, passing little habitation clusters (can’t even call them villages) with such whimsical, beautiful names like Lingti, Schilling and Poh. At noon we roll through Tabo and decide to move on.

Ten minutes later, more surprises in store. We’re in Hoorling. Apple trees on both sides crop up, trimming the harsh mountain sides. The main street has its usual lineup of dhabas, STD-PCOs and guesthouses. To the right is a giant prayer wheel (and I mean, giant, it’s as large as a house). It’s fixed on a moveable base, inviting passersby to turn the wheel. (Remember, it’s to be turned clockwise, some thing I learned at the Ki Gompa.)

We stop here for some food, discover there’s more Maggi in store (this is really getting too much), eat it anyway, and move on. Ten minutes later, we cross Sumdo (which is the closest we’ll get to the China-Tibet border), then Shalkhar where we see our first patch of decent green, and then finally Chango, from where we have to pick up the new Malling road.

A taxi driver in Kaza has warned Ajay about this road. It’s all spanking new and tarred, but it takes barely ten minutes on it, to figure out why it’s such a challenge. In a near-continuous 45-degree climb, the road quickly takes you from the valley floor to near the crest. Tires squeal, rubble flies, and we’re left wondering how high we can possibly go.

After a bone-jarring ride through the new Malling road (which, by the way, has its crumbling spots as well), we land at Nako Lake. One look and its clear that we really need to move on. So after some tea, and stocking up on chocolates and Hajmola toffees (for Damini who is beginning to feel pretty queasy by now), we roll off. I turn on some of Damini’s dhin-chuk dhin-chuk Hindi numbers, and that seems to cheer her up. Sid is sulking, he’d rather hear Dire Straits!

It’s just after 4.30pm when we cross Ka village and the road starts zig-zagging wildly down the side of the narrow gorge. Down, down, and before our Maggi can travel up, we’re down at the bottom, where the river Sutlej meets Spiti. Here, we discover that, ehm, we weren’t following Spiti as we had thought all along, but the Sutlej. Well, we live and learn, or rather, travel and learn.

We’re now down to 2510 metres, so it’s definitely warmer, but now much green to show for the drop in altitude. At Puh, where the Border Roads Organisation has its base, we take a rough and tumble diversion because of a landslide. From here till Rekong Peo, we’ll come across countless fallen roads, hastily created diversions, and some downright crazy routes. It’s apparently all because of the rains that lashed Himachal last summer, barely a month after we’d returned from these very parts after our Sangla trip.

Finally, at 9pm, ravenous and tired, we roll into Kinner Villa’s parking, hoping they won’t turn us away saying, “No empty rooms.” Fortunately, we get a room, a nice one, though not as smashing as the corner one we stayed in last time, but I am more concerned with the cook. Is he still around? He is, and in fact, turns up at our room and is all nice and welcoming and wanting to know what he can get for Damini. It almost felt like coming home.
Next day, we wake up to discover there is actually quite a crowd at Kinner Villa. A group of Americans (middle aged couple traveling with their respective elderly parents) and a 60-plus Indian couple that is celebrating retirement with a journey through Srinagar, to Leh, onto Manali, through Spiti and finally here. Wow!!! That’s the way to go grey. The pendulum swings the other way with a portly UP family from Delhi that is busy taking pictures by Kinner Villa’s stupendous roses. They seem to have trouble digesting that we are doing all this traveling with little kids.

Our digestion is obviously going fine, we’re happily tucking into spring rolls, and malai koftas and, to top it all, sooji ka halwa. For once, Damini is showing some signs of reviving and going with gusto at the halwa. Must be her Haryanvi roots.

By evening, consensus is reached. We all want to get home, in one shot. No stops, no night halts. No more hotel beds. So, taking a deep breath, and a heavy breakfast, we shoot off from Kalpa in the morning, swing through crowded Shimla by evening (really, it’s Karol Bagh, Chandni Chowk and Paharganj rolled into one), stop for a chai-pakora-buy wine and cider pit-stop and then headed for the plains. Crossing Ambala, the minute the highway splits into dual carriageway, I take over. Nice and quiet and 100 kmph all the way till Panipat (or was it Sonipat?). Here, Ajay takes over for a while, and finally at Kundli border I’m back at the wheel, zipping through the streets of Delhi, humming to FMs non-stop music, till we come to a stop outside home at 4 a.m.