Which is the best cycle for touring the Indian himalayas?

People often ask me what is the best cycle for touring the Himalayas. It is a hard question to answer, mainly because different people define ‘touring’ differently.

For instance, cycle touring may mean cycling hundreds of kilometers self-supported where the rider carries a tent, sleeping bag, cooking gear on the bike, and has the option to stop and camp wherever she fancies. However, many of the well established Himalayan routes can also be toured ultralight, by eating and sleeping in teahouses (dhabas). And then there is the option of riding without any baggage because the support team/vehicle follows the rider(s) closely.

The choice of cycle can vary significantly depending on how you define ‘touring’, which route you pick, and how much road support you have. Consider the iconic Manali-Leh route. I am aware of people who have done this trip on an MTB, on a Hybrid, a touring bike, on a single-speed bike and even on a road bike.

If you are going to ride with only a saddle bag under the seat, with a support vehicle in tow, then you could pretty much choose whichever cycle you want. Just two caveats: Depending on where you are going, some of the passes can be steep, even for unladen bikes, and the gearing for most stock road bikes may not be appropriate for most riders. Some of the roads in this part of the world can be really bad, so skinny tires, rigid fork and drop-down bars may not be advisable, unless you are a glutton for punishment. However, if you are not venturing into deep Himalayas and know that the roads are in reasonable condition then you could definitely ride a roadie. The Tour of the Tigers (and the Tour of Nilgiris, which is not in the Himalayas, though) are often ridden on roadies. 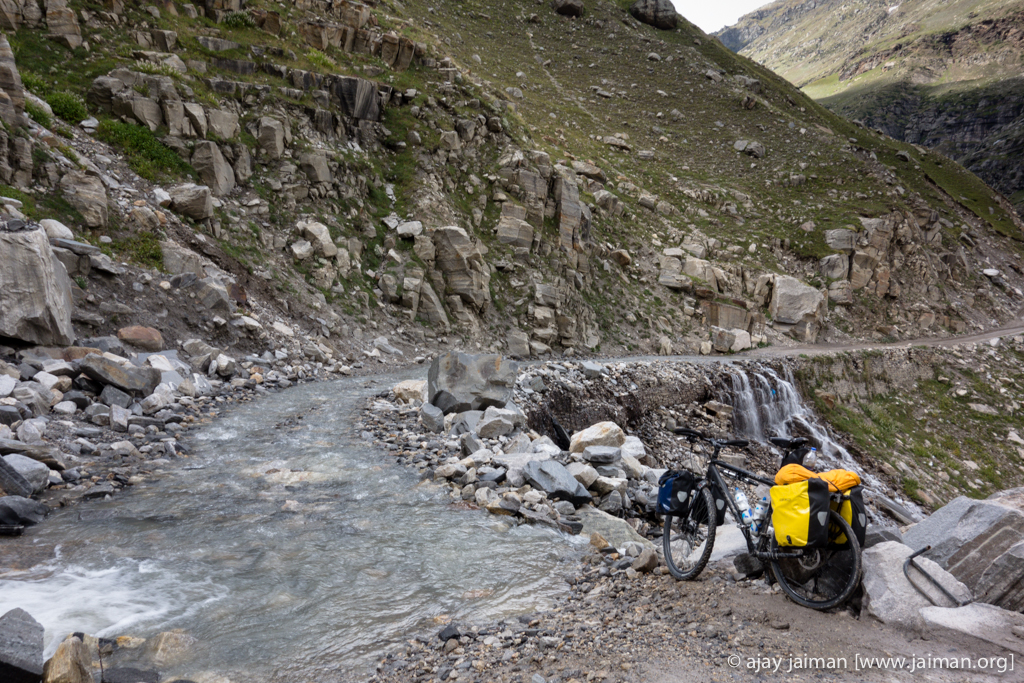 Ready to ride through a stream flowing on the road. Dry bags (waterproof Ortliebs) but wet shoes.

If you are going fully laden (generally over 25 kgs) you should consider a touring bike or at the minimum a Hybrid bike with appropriately low gearing. On fully laden tours I have never heard of anyone complain of too many low gears, and with all that weight on your bike it would be ill advised to get into the top gear and hammer the downhills. More on cycle gearing here.

If you are going fully laden and know that you are going to venture away from the major Himalayan highways, (they may not look like major highways, but often are), then you must seriously consider an MTB/touring bike, perhaps with front shockers. You could go with a rigid fork, as I do sometimes, but be prepared for some punishment on the gravely and rocky tracks that are often found near the not so well traveled high passes.

Have you ridden the Himalayas?
What was/is your set up? And what has been your experience? Feel free to add to the conversation.

My current touring rig:
Here is a description of my current rig. It is not perfect, and it is far from the best that money can buy. I have built it slowly over the years and it works well for most part. I must admit that sometimes I miss the front shocker. On my recent trip across Spiti valley the hundred odd kilometers from Losar to Gramphu was one continuous rock-field with many river/stream crossings thrown in for good measure. A nice shocker wouldn’t have hurt! Next time I am on a trip like that I will consider carrying a RockShox along! 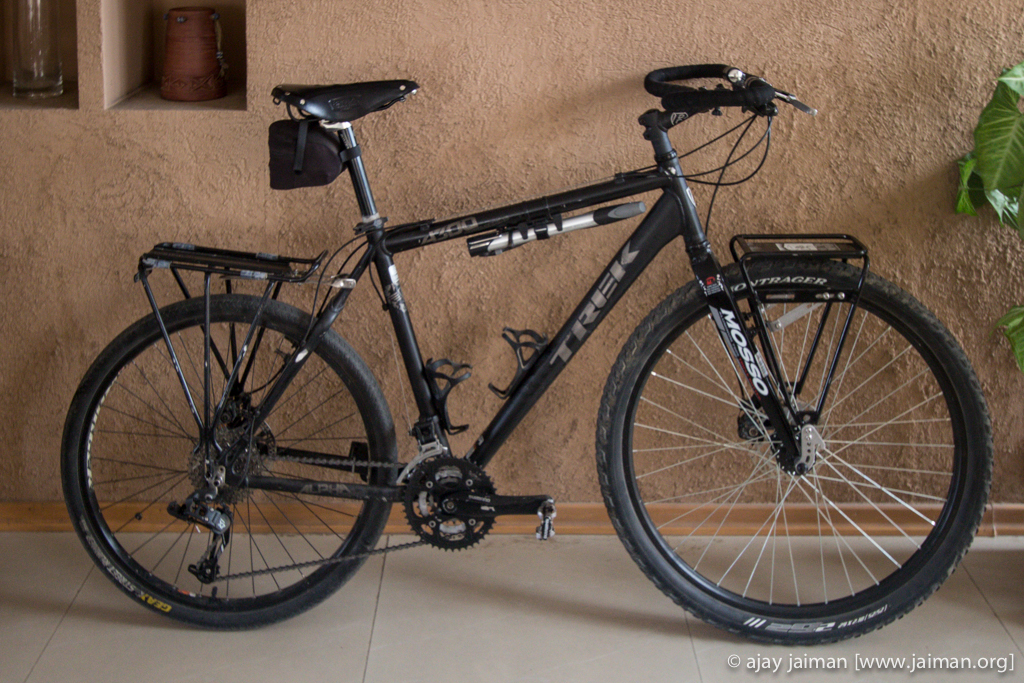 Trek 4300 modified for Himalayan touring. Nothing on this bike, other than the frame and seat post, is original.

Original bike: Trek 4300
Everything other than the frame and seat-post has been replaced/changed over the years.

Wheels: 29er in front and 26er in the rear
Why I do that is a possibly a blog entry by itself

Fork: Rigid aluminum alloy (Mosso)
Very good value for money (Ebay) but it really is rigid. I have had no problem doing short off-road rides with it, but extended rides over rock-fields can get a little tough, as I discovered recently.

Handlebar: Butterfly/Trekking bar (Nashbar).
Another great value for money item. Having climbed over 10,000 vertical meters with it, I am a convert. I can’t imagine doing another loaded tour with regular flat bars. These are just awesome, and would highly recommend it. Perhaps a detailed review would be in order.

Saddle: Brooks B17
I have had no issues with it. But I am not sure that it is significantly better than my previous saddle. I am told by multiple people that I need to give it 5000 kms for it to really grow on me. I guess I will reserve my judgement till then. The only downside to this saddle is that you have to worry about exposing it to the elements – it needs to come into the tent at night, or get a waterproof bag of its own.

Pedals: Shimano M520 Clipless SPD MTB Pedals
For touring many people prefer pedals which have flat pedal on one side. Somehow I prefer pedals with SPD mechanism on both sides, that way I can cleat-in on either side with minimal fuss.

Pannier Racks:
Front: Old Man Mountain
Rear: Topeak. On the last tour I noticed that the rack was making significant creaking noise. On closer inspection I noticed that some of the bolts had come loose with all the Himalayan rattle. Once tightened, I did not face any more issues. Have had zero issues with Old Man Mountain after multiple trips.

Pannier Bags: Ortlieb
Have used them on multiple tours and logged in over a couple of thousand kilometers and I have had no issues at all. Would unconditionally recommend them. 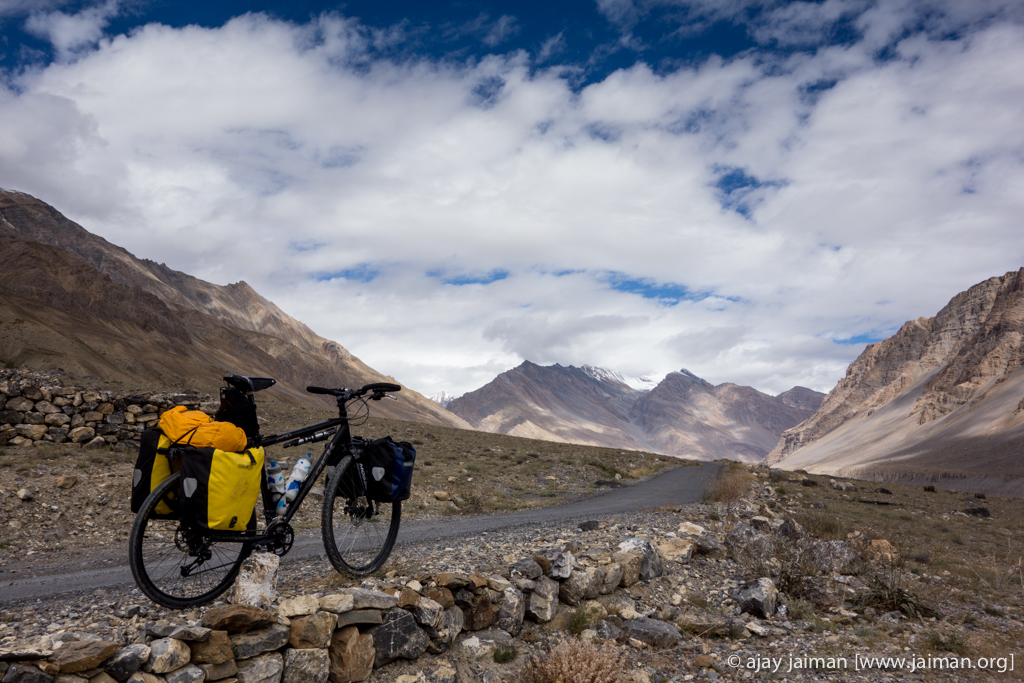 My current cycle rig for cycling in the Indian Himalayas