Trek to Chandratal -- the moon lake

Educational consultant Ajay Jaiman, 40, trekked to Chandratal over the Dussehra break last year with three other families—the Bhattacharyas, the Chopras and the Chakrabartis—ranging in age from 7 to 51. Despite a recent heart attack, which has postponed a high-altitude lake expedition this summer, he has not given up on physically demanding outdoor breaks 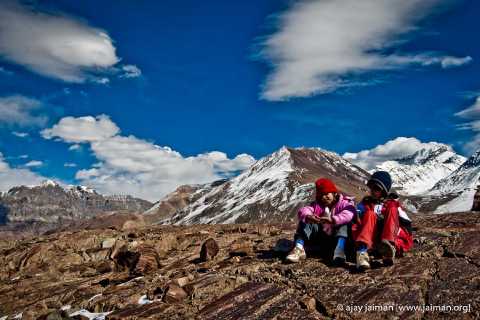 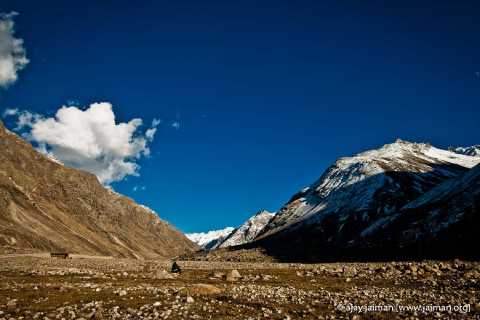 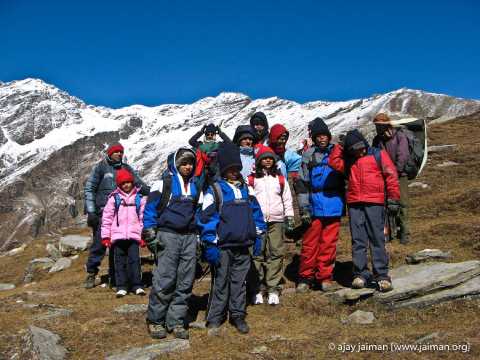 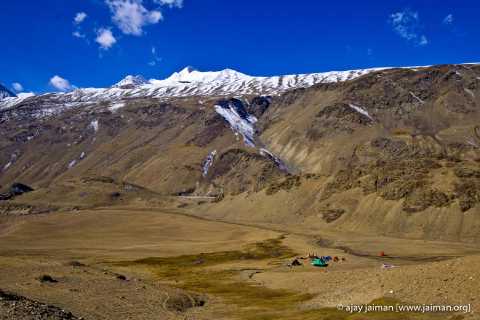 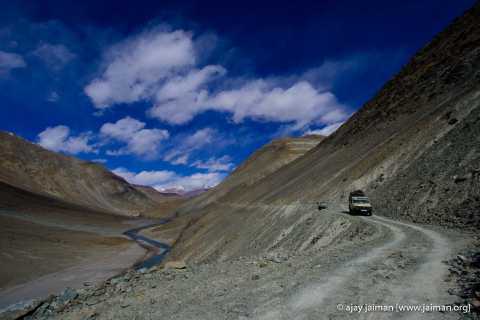 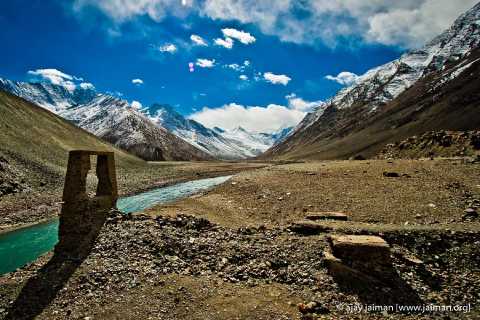 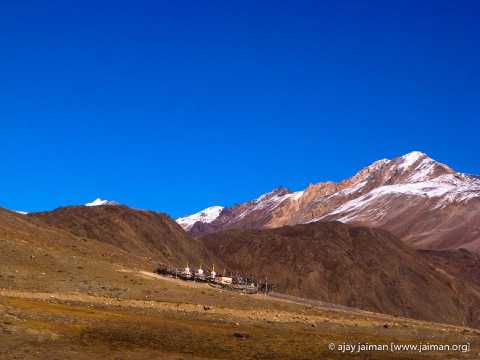 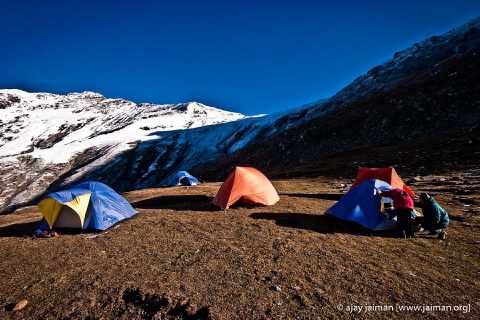 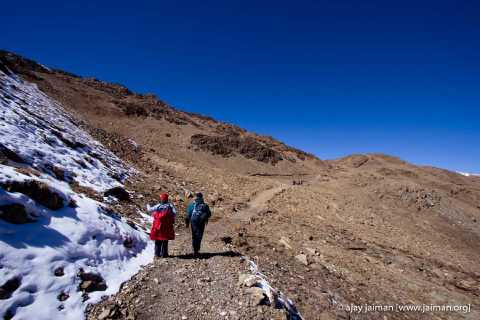 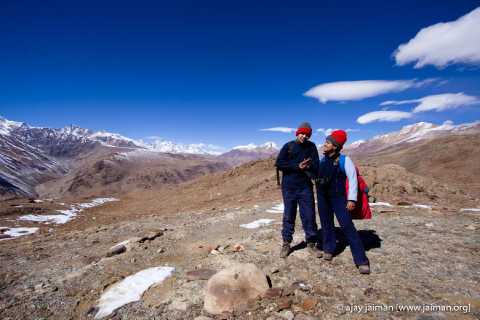 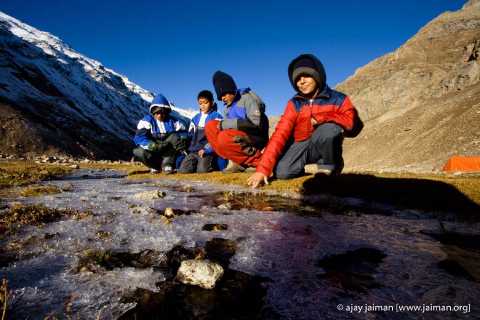 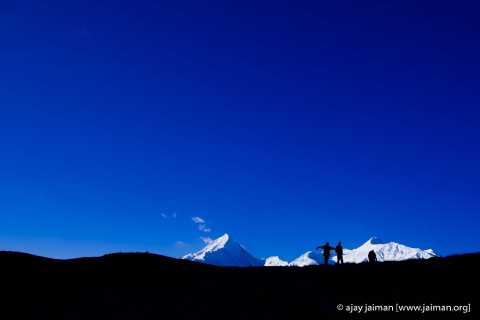 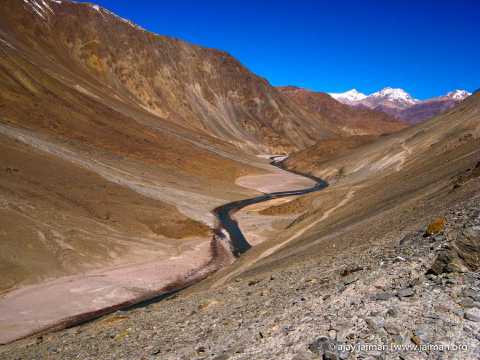 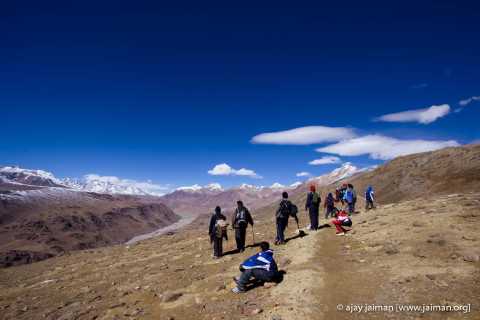 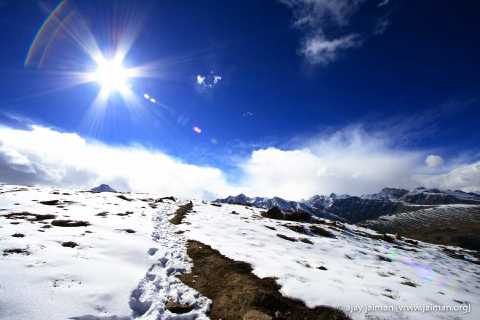 I like to be outdoors when on vacation. Therefore, most of our holidays tend to focus on the outdoors and are often activity-oriented. We have a core group of three families with children in the same age group who go trekking together. Chandratal had been on the cards for some time. As a group, we had seen pictures, talked about it, and my family had been in the vicinity during one of our driving holidays some years ago. The Dussehra break in schools is not long enough to plan a long trek, and Chandratal seemed doable. We knew that the passes may be a challenge and the altitude could require some acclimatization, but apart from that, we thought it would be good.

Was this an organized trek?
Yes, we were travelling with the young entrepreneurial outfit we always trek with. We travel with very young children—children who are in no way ready to carry their own sleeping bags—and many of us adults, too, are not serious alpine-style climbers who can carry our own tents and kitchen on our backs. For us as a group, to trek through uninhabited landscapes, cook in the wild and sleep in tents, is made possible by good quality support—porters, cooks, and guides.

What kind of gear did you need for a high-altitude trek like this? First, there is common gear such as waterproof tents, sleeping bags (on this trek, it was so bitterly cold that we needed fleece linings along with the sleeping bags), a mess tent and a kitchen tent along with all the cooking gear.

Do you invest a lot of time preparing for a holiday?
I remember that the first trek required a lot of planning and prepping, especially because the youngest of the children—my daughter—was all of six years old at the time. By the time we started getting ready for Chandratal, we were beginning to consider ourselves veterans. We knew that our biggest challenge would be to get ourselves acclimatized to the altitude and the rarified air out there—the area also happens to be barren and treeless, which adds to the lack of oxygen.

Was acclimatization an issue?
We were concerned about acclimatization, so we planned a half-day trek from Manali and one overnight trek to Dashaur Lake before heading out to Lahaul. Every successive camp was at a higher altitude, and so was every successive trek/acclimatization walk. Adults and kids were constantly reminded, even forced, to drink lots of water and stay active.

There were one or two incidents of minor headaches and queasiness, but eventually everybody managed to deal with the lack of oxygen just fine. But, what we had not anticipated was that the temperatures would drop to minus 10 degrees Celsius. We were not really prepared for that.

Tell me about the trek itself: How did you pace yourselves?
Once you cross Rohtang Pass and turn off into Lahaul, the landscape turns from green to shades of brown. It is a deserted, high-altitude valley surrounded by steep mountains, broken only by the silver water of the river Chandra. The next habitation is some 6 hours away—we know this from our previous driving trip through Lahaul and Spiti. Between Rohtang La and Kunzum La, there are only two dhabas on the road and no other habitation. If you trek in this area, you need to carry everything with you!

After all the days of acclimatization walks and treks we finally started the Chandratal trek from Kunzum La, an altitude of 4,550m. At this altitude, there is very little that can grow; the landscape is very barren. The entire landscape here is poetry in two colours—rusts and browns of the earth, which contrast dramatically with the blues of the sky. The whites of the clouds or snow can add an occasional distraction.

You can carry fancy equipment—dome tents, butane cylinders, Swiss knives, Thinsulate liners, Gortex shoes—but eventually, the things you need most are the basic values your kindergarten teacher taught you: share, work as a team, respect the environment and other people, accept differences.

How did the children find the trek?
Objectively speaking, this wasn’t really a very challenging trek—there were no scary or dangerous parts, there weren’t any 60-degree walls to climb or rivers to cross. We have done all of that in the past yet, on this trek, we were all spent like never before. In fact, some of the strongest kids in the group let it be known that they were done with trekking—I am hopeful that there was an unstated “for now” appended to the sentence. By all accounts, this was not supposed to be a very tough trek, so I attribute the disenchantment to a combination of lack of oxygen, bitter cold (if you account for the wind chill, the temperature barely climbed into the positives in the day time and touched minus 15 degrees Celsius one night) and a cramped schedule—we did too many acclimatization treks and walks in too few days.

So, overall, the holiday was not a shining success?
Planning this trek for October was a mistake. The road through Lahaul is officially closed after September, which means that if there is a landslide and the road is closed, the government is not officially required to clear it up till next summer. Also, in October, the weather can turn bad in a flash, within 10-20 minutes, and if there’s snowfall at Rohtang La, people on the other side can get trapped.

While we were carrying enough food and other rations to deal with multi-day delays, and had a backup team ready in Manali, getting snow-locked would have been a disaster.

In hindsight, it was not the brightest thing we have done with kids in tow. Also, what we did not plan for were highly temperamental taxi drivers. On the last day, after we came back from Chandratal to the base camp, the weather threatened to turn bad. Snowfall looked imminent and the taxi drivers started to threaten to leave us and go back. Apparently, if a taxi gets stuck on the other side of Rohtang at this time of the year, it can sometimes be stuck there for up to six months. That obviously means significant financial loss to the drivers. Eventually, we left early—like them we were not too keen on getting stuck either.

Getting There:
Delhi to Manali is most conveniently covered by road. Himachal Pradesh Tourism operates Volvo coaches between the two points; one-way fares are Rs990.

You may also be interested in these related posts:
Trekking to Beas Kund
Bhaji on the bypass
Sailing through Spiti (Part II)
Spiti: Swirling box of crayons (Part I)
Driving round the bends in Himachal